Battles between the allied and axis powers raged across the territory of Papua and New Guinea - none more poignant to the memories of Australians, New Zealanders and Papua New Guineans than that of the Kokoda Track Campaign.

Between July to November 1942 a series of Battles were fought along the Kokoda trail, beginning from the beaches of Buna in the Northern Province to Ower's Corner, Koiari, in the Central Province.

Casualties numbered in the thousands during the Kokoda campaign, and the tales of sacrifice, victory and defeat still linger among the descendants of those that lived to witness the battles.  National commemorations are held annually to remember those that served.

The Fuzzy Wuzzy Angels are heroes of national renown in Papua New Guinea. They were native Papua New Guinean recruits who served as laborers, carriers and scouts during the Kokoda Campaign.

Many a mother in Australia,
When the busy day is done,
Sends a prayer to the Almighty
For the keeping of her son,
Asking that an Angel guide him
And bring him safely back
Now we see those prayers are answered
On the Owen Stanley track,
For they haven’t any halos,
Only holes slashed in the ears,
And with faces worked by tattoos,
With scratch pins in their hair,
Bringing back the wounded,
Just as steady as a hearse,
Using leaves to keep the rain off
And as gentle as a nurse.

Slow and careful in bad places,
On the awful mountain track,
And the look upon their faces,
Makes us think that Christ was black.
Not a move to hurt the carried,
As they treat him like a Saint,
It’s a picture worth recording,
That an Artist’s yet to paint.
Many a lad will see his Mother,
And the Husbands, Weans and Wives,
Just because the Fuzzy Wuzzy
Carried them to save their lives.

From mortar or machine gun fire,
Or a chance surprise attack,
To safety and the care of Doctors,
At the bottom of the track.
May the Mothers in Australia,
When they offer up a prayer,
Mention those impromptu Angels,
With the Fuzzy Wuzzy hair.

(The Fuzzy Wuzzy Angels and other verses, published 1945) 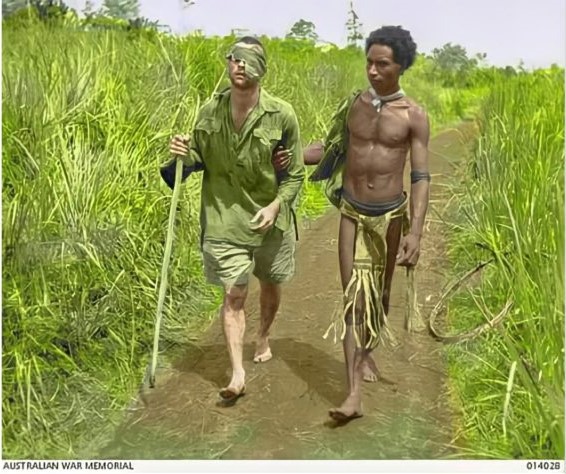 Above image: Photo by George Silk of Australian Private George Whittington being led to a field hospital near Buna by carrier Raphael Oimbari. Image colorised by Aufa Tora Media.